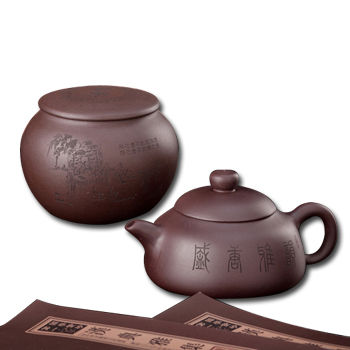 Teapot is a unique product bred by a long time Chinese civilization. For thousands of years, generation after generation of pot artists have injected their own unique aesthetic tastes into them, transforming the teapot's common utensils from boiled water and tea into artistic treasures for the literati and the world. People's love. Since the 1980s, due to over-hype, the investment reputation of Zishahu has become increasingly corrupt. After a decade or so of adjustment, the price of teapots has recently begun to climb. With the growing number of collectible lovers, the collection of teapots has become one of the hottest topics for financial investment.

The order of the pottery record written by the Japanese teapot collector Osamu Tomohiro (written by Minjiang Kawada just in the 9th year of the Meiji Period, and by Meng Chunyue in the Meiji Period) said: "A pot of Ming dynasty, worthy of a person's production, and for the pottery When the kiln was still its name, it was often blamed by the merchants. So Lao Tian Aojun recorded his possessions and possessions by the Tonghao Library for the sake of Sishi.â€ The pot-art work of the contemporary potters' masters is even more striking. For example, the â€œYin and Yang Taiji Kettleâ€ of Mr. Lu Yichen, a master craftsman of Chinaâ€™s arts and crafts, sold a 150,000-yuan *** auction in 2006. He produced another set of â€œSmall Stone Cold Spring Potâ€ with an auction price of 600,000 yuan. The popularity of the contemporary teapot art collection culture.

Now that the collection is in its proper time, the teapot is a wonderful work in the Chinese ceramic art. Its â€œcolorless, non-greasyâ€ features give people a beautiful enjoyment. Use it to make tea, neither fragrant nor cooked soup, and tea storage does not change color, summer is not easy to lick. Zisha Hushen's body sculpture integrates traditional Chinese arts such as gold stone, painting, and poetry. After careful maintenance of the teapot, the body is plump, moist and bright. Because the teapot has strong practicality, superb craftsmanship, and elegant purple sand art, the dynasties are the object of people's collection. Especially for some well-made teapots, it is the equivalent of mud and gold. "The phenomenon.

First, with the development of social productivity, the level of modern machinery is getting higher and higher, and traditional crafts are eroded step by step. Zisha pot this traditional craft is no exception, a new generation of teapot maker master is less and less, fine and less teapot, which led to the increasing price of teapot.

Second, in addition to the declining traditional crafts, the scarcity of Zisha mud, the source material of teapot, has also led to a rise in the price of teapots. The purple clay consists of three types of mud: purple clay, green mud and red mud. After thousands of years of mining, the quality Zhuni mud reserves in the red mud have already dried up in 1973, and the red mud products are almost shut down. The amount of top soap "bottom soap" in the purple clay is also becoming scarce. The green mud is a relatively rare material in the Zisha peat. According to industry insiders, Yixing's purple clay can only provide up to 50 years of production. After the government controlled mining, good purple clay was difficult to find, and the price of purple sand raw materials went up all the way. At present, the price of 1 kg of fine purple clay in Yixing has exceeded 20,000 yuan; on the other hand, teapots made from pure purple clay that are circulated on the market will gradually become scarce due to the loss in use, so from now on, The collection of teapots, especially the "rooting Miaohong" variety, will have high investment value.

Third, the current market price of Zishahu is relatively low. The price of the traditional teapot is only about 30% to 45% of the high price in the 1980s and 1990s. Many teapots from famous artists are worth less than 1/10 of the peak period. This situation has been linked to teapots. Evil speculation related. In the early 80s of the last century, the teapots on the market were common products used for drinking tea. They had only use value and had no collection value. The number of expensive teapots was small. Later, the wind of the Zishahu collection in Hong Kong and Taiwan was introduced into the Mainland. The price of the teapot produced by famous artists rose rapidly, ranging from several tens of thousands of yuan to as high as several hundred thousand yuan. In addition to the hype of the merchants and the pursuit of the market, a more ordinary work at that time could also be sold for nearly 10,000 yuan. Irregular speculation led to a sharp drop in the price of teapots since the 1990s.

Fourth, although the current overall price of fine teapots has picked up slightly, it hasn't risen sharply. The best market price should be two or three years later. At present, it is a good time to take it low. In the boutique market, the Qing Dynasty teapot is still the main body of the high-end market. Judging from the top 20 trading prices of Zishahu in previous years, the Zishahu in the Qing Dynasty accounted for 80%. For short-term investors, instead of purchasing the Ming and Qing zisha pots worth tens of thousands of yuan and tens of thousands of yuan, it would be better to buy modern teapots of lower quality at a reasonable price, and a handful of teapots in the early 20th century would only need one hundred Around Yuan, celebrity hand-painted teapots are generally priced from 40,000 yuan to 50,000 yuan. At the same time, they can also consider the collection of some modern master craftsmen.