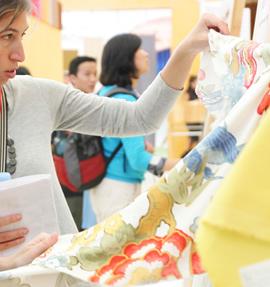 Recently, the reporter learned from Jiaxing Customs that in the first quarter of this year, textiles and garments (including textile yarn fabrics and products, clothing and clothing accessories, the same below) of Jiaxing City exceeded 10 billion yuan, an increase of 2.9% over the same period of last year. According to the analysis, the developed countries implement the manufacturing return strategy, the domestic textile and garment industry has increased the pressure of competition, and due to the increase of the emerging market variables, the diversified development of the city's textile and apparel export market will be affected, and the imbalance between supply and demand will also lead to low price fluctuations. Profit space compression.

The three major foreign trade markets of the European Union, the United States, and Japan are still the main export markets for textiles and apparel in our city. From the perspective of the export situation in the first quarter of this year, the city's exports of textiles and clothing to the EU and the United States reached 2.18 billion yuan and 2.14 billion yuan, respectively, an increase of 6.8% and 0.8%; exports to Japan 1.36 billion yuan, a decrease of 18.1%. In addition, the cityâ€™s export of textile and clothing to ASEAN, Latin America and Africa reached 790 million yuan, 630 million yuan and 490 million yuan, respectively, an increase of 24.5%, 0.3% and 17.1%.

With the rapid rise in labor costs in Asia and other places, most US apparel brands and retailers are considering returning some manufacturing operations to the United States. U.S. consumers also increasingly favor â€œMade in Americaâ€ products and are willing to pay higher prices for it. This will cause no small impact on the export of Jiaxing textile and apparel to the United States. In addition, compared to China, Spain, Turkey and other European countries have many advantages in the textile and apparel industry, such as distance, low freight rates, and favorable taxation rates, and their competitiveness has increased, which will increase the pressure on domestic textile and garment industry competition. In addition, due to the reduction of quantitative easing by the United States, the economic development of emerging markets such as Latin America, Africa, and ASEAN also faces many variables. It is expected that the diversified development of the textile and apparel export market in our city will be affected.

â€œIn the face of various unfavorable factors, Jiaxing needs to support and guide enterprises in accelerating industrial and product upgrades, seek new growth points, continuously increase added value, and strive to form new competitive advantages.â€ Relevant person in charge of Jiaxing Customs advised to strengthen the focus The monitoring and early warning of the export market situation provides information support for the production and operation decisions of enterprises and reduces trade risks. At the same time, relevant departments must strengthen guidance and avoid blindly expanding production capacity and promote the coordinated development of upstream and downstream industries in the textile and clothing industry.